Back again. After a drive from So-Cal to Rachel, NV and then points north, I can state, without question, that the reason why California has so few (relatively) “Other World” contacts is due to the minimal intelligent life found there.

Without exception, everyone that had ANYTHING even marginally worth discussing was “From Somewhere Else.”

As I mentioned in my last posting, the last series of articles I had been working on were supposed to be “True Abductions,” however, after an impromptu rectal redirect, the project became “Worlds Around Us” and with the open minded empathetic view for which I am known, we have moved forward.

I let everyone from a former Vatican Priest working in the oil fields of Alberta Canada to the owners of a boutique Burbank bookstore (Dark Delicacies’ – Hi Sue) know that I was looking for folks/beings that had or were unique.

I was contacted by an individual that claims to be a 400 year old Vampire, another that was the liaison for the area 51 visitation, and a group of cannibals, and that was in the first week.

So…Not much between Southern California and Rachel, NV. Well, there was one little thing but we’ll see where that goes.

I drove out of Vegas on Hwy 95 through beautiful Mercury, NV. Now you have to understand that Mercury is where some of the biggest and best gather to test atom bombs underground. As you look to the right of the highway, you can see the sunken indentation of the ground where the underground blast facility is.

As I took the exit, I couldn’t help but notice that the hordes of atomic bomb protesters voluntarily handcuffed together blocking the road (which I had been assured were ever present) where absent. However, there was a dome tent surrounded by 4 Humvees, two unmarked black suburbans and about a dozen uniformed and suited individuals (2 females Yeaa EOE) pointing various weapons at some old guy kneeling on the ground with his hands apparently laced behind his head.

I continued past, not showing noticeable slowing, and headed down the two lane road toward the old blast site. Pulling over to the side of the road, I took my new digital camera out. I really prefer the Nikons and Leicas my dad gave me but just had a feeling about this place and didn’t want to expose them.

Getting out of the bus to take some general vista shots, I found it pleasantly quiet, right up until the two Humvees came screaming in my direction. I got back in the bus acting like I didn’t notice them and continued toward the site, right up until one blocked my progress as the other did an e-break turn to block me from behind.

Four men got out of each of the vehicles and I was ordered to step out of the car. I wanted to tell them it was a VW Bus but that didn’t seem prudent at the time. I found myself laying on the yellow line of what remained of the two lane road.

After basically ransacking the bus, I was given back my ID and was told I could go. As I looked around at the disheveled contents, one of the men said, “Major Demon, we don’t take kindly to un-American activities and would strongly advise you not return.”

As I started the bus and put it in gear, I looked back up at him and said, “You know, I was born on the 4th of July” and drove off.  For those of you wanting to send me cards and cakes for my birthday, I really wasn’t born on July 4th, but it seemed like a good come-back.

As I was putting the bus back in order and taking inventory, the old guy from the tent came out and saw me. “Hey! Guess they didn’t like you much either.” I looked at him, “Guess not.” Before I could introduce myself, he stretched out his hand, “Bart Star. No, not the football player.”  “Nice to meet you Bart. Harry Demon,” I replied.

Bart explained how the government was using alien technology to listen to the thoughts of everyone within 100 miles of TOP SECRET installations and here they did it even more, because of the brothels and all.  He gave me a baseball cap with a marijuana leaf and the word POTLUCK on it. Told me it has a special fiber woven into it that blocked them from reading your thoughts. I handed him a 20, figuring he could use it, and that’s why he was handing out 5 dollars hats with the alien mind reading story.  He shyly said he couldn’t take it — he was just trying to save mankind. My dad always told me not to offer money twice.

About 4 hours later I got to Rachel, NV, the entrance to area 51. There is a little bar, restaurant, gift store called the Little A’LE’INN. It’s run by an older woman, Pat Travis. She and her husband (who passed away a few years ago) have been running it over 20 years and have been the local historians for all things alien and area 51.

I went in and had a beer and sandwich. Both were OK.  Nothing to write home about but since I’m writing I might as well mention they were better than expected but not great. Talked to some of the patrons, most of whom were waiting around until nightfall to hike up the hill and see UFO’s. I should mention, the hill is on government property with signs that tell you “The Use of Deadly Force is Authorized.”

Decided to stick around and see what happens tonight, talk more to the folks and see where it goes. Met two little girls that were excited about seeing aliens, said their dad knew some. They were good enough to let me photograph them by the local signs. 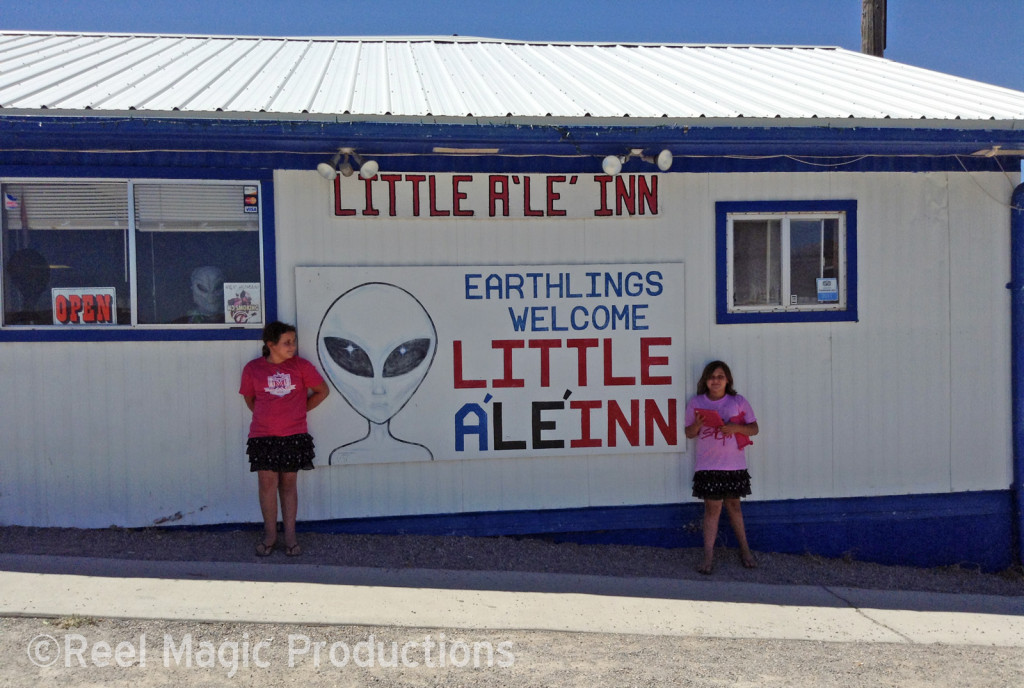 Two cute kids outside the Little A’LE’INN. Is that their father looking out the window?

I was concerned that, as I pulled out to get back on the road, I noticed a baseball cap with a marijuana leaf and the word POTLUCK on their dad’s truck’s dashboard.

Originally I had planned on doing another in my series “True Abductions” this week, until I received a phone call from the Landers, CA area that went something like this:

I want to speak to that asshole, Harry Demon

Mr. Demon, I have read your work for years and always believed you to be an extremely enlightened being. However, I read your article last week about nut jobs that claim to have been abducted by other-worlders against their wills and

Yes, the people that come from other planets trying to help us earth bound souls progress both spiritually and scientifically.

My group and I feel that you have been very offensive and somewhat an Earthist toward these beings and want an apology.

You may call me Dian Ren, its my other-world name and means “person of light.”

Ok, Diane, why don’t we get together in the near future and discuss your position.

That would be wonderful. See I knew that if I just called you would understand and make everything right. Thank you Mr. Demon.

Ok Diane, give my assistant your contact information and I’ll get back with you in the next few weeks.

So, I called a buddy of mine that did a TV show a few years ago which had all sorts of UFO related stories and asked him, “Chris, how many episodes of UFO abductee stories can be told while keeping the audience interested.”

With this information, I decided to put the word out that I was again looking for interesting people with unique stories.

I hope to have something with meat to write about next week …assuming I haven’t pissed off the wrong Other-worlders and am instead having my anus probed.

Stay away from the light.